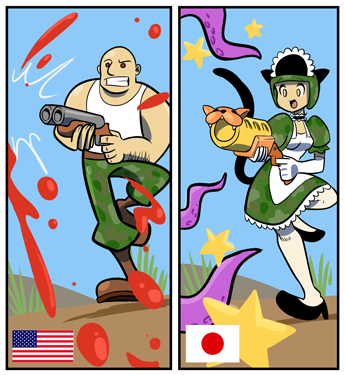 From gritty to moe, the world truly is a wonderful place.
"If eating pork cheeks in English is an atrocious and disgusting experience, then I cannot talk about pork cheeks being cooked; because we cook them sublimely and enjoy them here. [...] The important thing is that the reader feels the same as the original reader, not that the words are the same. If [a character] ate pork cheeks and he has to eat skewered worms in the Castilian version, skewered worms they shall be."
— Cristina Macia, Spanish translator of A Song of Ice and Fire
Advertisement:

When a show is redubbed for release in another country, the dubbers will often replace the cultural references with others more easily recognized by the foreign audience.

In the best of cases, Cultural Translation will change obscure cultural references that many viewers would not "get" into related, but more familiar, footnotes without interrupting the flow. In the worst of cases, it can come off as a pandering attempt to edit anything vaguely foreign or potentially offensive out, even when the images make it blatantly clear that the characters aren't, and were never, in [insert home country here]. Willing Suspension of Disbelief gets a hard day from overzealous Cultural Translation in a Foreign Remake.

On the other hand, if the work is set somewhere other than where it was created, this trope could help to correct Creator's Culture Carryover if done in the same country of setting.

Compare with Woolseyism, where the changes are generally made for aesthetic reasons, and rather than translating the concept, instead replace the original with something completely different but which fits better with the new target audience.

For subtropes, see American Kirby Is Hardcore, Dub Name Change, Dub Personality Change, Keep It Foreign. For when this trope is attempted to the point of trying (and often failing) to hide its true country of origin, see Thinly-Veiled Dub Country Change. Compare and contrast Widget Series.

The Other Wiki has a page on this.