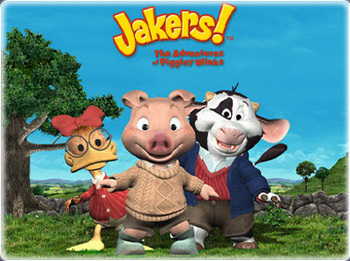 Ferny: Dragons only eat princesses locked away in towers.
Molly: I'm a princess! Someday, I'll be a queen.
Ferny: You're a goner.
Advertisement:

Jakers! The Adventures of Piggley Winks (simply Jakers! in Europe) is a CGI-animated children's television show produced by Entara Ltd. and Mike Young Productions which ran in the United States on PBS Kids from 2003 to 2008 and on Univision, dubbed in Spanish, from April 2008 to September 2010. It has been broadcast in Ireland on RTÉ's children's block, The Den, and in the UK on Cbeebies. Adored by networks worldwide, the series has been dubbed in Spanish, Scottish Gaelic, German, Portuguese, Danish, Swedish, Norwegian and Italian.

Jakers! Ye'd do well to stop yer babblin' and show these dear readers why in the name of the great Begorrah this fine little show is worth shakin' a stick at!

Nostalgic Narrator extraordinaire Piggley Winks lives in the suburban United States note or England, depending on where you are with his daughter, Ciara, and her three children, Meg, Sean and Seamus. The series is a frame story in which the tales of Grandpa Piggley's boyhood days in rural Ireland, which Piggley often relates when his grandchildren are in need of a lesson, construct the outer frame. As Grandpa's stories unfold, the audience enters the inner frame and travels to Raloo Farm in the village of Tara, where eight-year-old Piggley lives with his parents and little sister Molly. When he's not attending to farm chores or schoolwork, he's busy hatching dragon's eggs, turning donkeys into racehorses, searching for the legendary Salmon of Knowledge, and sneaking a piece of Mammy Winks' apple pie. Grandpa Piggley often reminds his grandkids that the world of his childhood was one in which the hurly-burly of modern conveniences never distracted him from a mischievous eight-year-old's Call to Adventure. Piggley is accompanied on his exploits by his two best buddies, Fernando "Ferny" Toro and Dannan O'Mallard. The three rely on their imaginations and childlike ingenuity to turn an ordinary world into an utterly fantastic one.

Jakers! is not without its Edutainment Show conventions; Piggley and his friends must occasionally recruit the help of adults, who are willing to step in and administer Aesops when things go wrong.

The series' subplot involves Wiley, a wisecracking sheep who has been imported from America to join the flock at Raloo Farm. He is considerably more intelligent, aware and curious than the rest of the sheep, and thus considers himself the Only Sane Man. Wiley tries desperately to coax his flock to participate in "high culture"; singing, dancing, filmmaking, and anything else that might add a little pizzazz to a life of munching grass. His voice might sound familiar.

All of the characters are anthromorphic farm animals, which leads to much Furry Confusion, especially considering that some of these characters live on farms on which they tend to... well, farm animals. Just go with it.

Jakers, troper! The other most important part!

Oh, yes. You're probably going to recognize a few of the voice actors. Believe it.