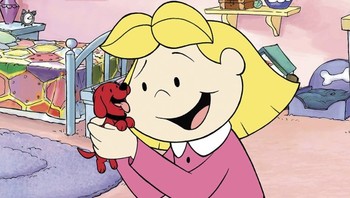 Clifford's Puppy Days is a PBS Kids cartoon that aired for two seasons from September 15, 2003 to February 23, 2006. It is a spinoff of the successful Clifford the Big Red Dog cartoon adaptation.

Taking place two years before Clifford arrived on Birdwell Island, Clifford's Puppy Days tells the story of Clifford's life as a young puppy. He lives with Emily Elizabeth, her parents, and their pet rabbit Daffodil. Clifford has a range of friends, dog and otherwise, in his apartment complex that he likes to play with.

The series was available for a time on Netflix and is currently on Prime Video.