Franchise / The Chronicles of Riddick 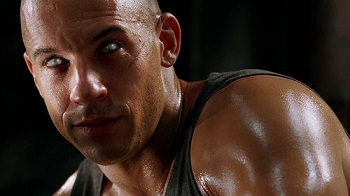 "All you people are so scared of me. Most days I'd take that as a compliment. But it ain't me you gotta worry about now."
— Riddick, Pitch Black
Advertisement:

The Chronicles of Riddick (or simply Riddick) is a series of Science Fiction/Low Heroic Science Fantasy franchise set in the 27th century. Its titular character, Richard B. Riddick, is notable for being a Last of His Kind Anti-Hero portrayed by Vin Diesel.

In 2000, Pitch Black was a surprise hit and quickly gained a cult following. The studio execs, spotting the series as a Cash Cow Franchise, thus began the expansion of the Riddick universe through several releases. In 2004, the universe was expanded through video game prequel Escape from Butcher Bay and animated sequel Dark Fury, which both detail the events before and shortly after Pitch Black respectively. Both were met with praise, with Butcher Bay being both a very popular game and easily one of the biggest fan favorites in the series.

Whilst the game and animation were very well-received sequels, the same cannot be said for movie sequel The Chronicles of Riddick, which has strongly divided the fanbase; not only was it widely panned critically, it still maintains some fans despite flat out disownment from some. Additionally, 2009 saw a second game, named Assault on Dark Athena, released to act as a sequel to Butcher Bay and as a second prequel to Pitch Black. Like the movie sequel, Dark Athena had a great standard to meet, and is generally considered to have fallen short (though still good in its own right).

A third movie titled Riddick (or, depending on the country, Riddick: Rule the Dark) was released on September 6, 2013. Plotwise, the movie is essentially a combo of Pitch Black and Dark Fury: Riddick is stranded on a desert planet of ruined human colonies, hideous monstrosities and violent planetary cataclysms and weather patterns much like the first film, but is pursued by Mercenaries with advanced and bizarre technologies and genetic enhancement, much like in Dark Fury. The trailer can be viewed here.

David Twohy, director of the live-action movies, has said in an interview

that he has plans for following up Riddick over another two movies: one big-budget, involving the Necromongers and the "Underverse" constellation; and then one low-budget, focused character story about Riddick's return to Furya.