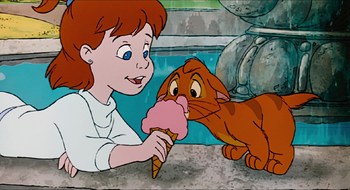 This scene is cute and all, but ice cream is bad for a kitten's digestive system.
Advertisement:

This trope is for when animals in fiction get care that would be improper if applied to animals in real life, but does not have the same negative consequences that comparable care would have in Real Life. Common versions include feeding an animal something it should never eat, keeping it in improper conditions, or handling it a way that would cause it great distress or even injury.

This does not include examples of animal abuse or improper care that is depicted as being bad for animals.

A Sub-Trope of Artistic License – Biology. Automaton Horses is a species-specific subtrope for cases where a riding animal (a horse or the in-universe equivalent) is portrayed as needing far less care than it realistically would. Some Stock Animal Diets fall under this trope (carrots as a staple, consistently, or to the exclusion of other vegetables and Timothy hay, are actually very bad for rabbits, and cheese isn't good for mice, for example). Can overlap with Canine Confusion. Remember, Tropes Are Tools; this can actually be done to teach An Aesop about proper animal care.