Visual Novel / Enchanted in the Moonlight 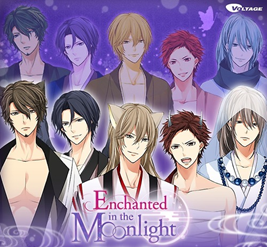 Your power... offer it to me
Advertisement:

Enchanted in the Moonlight is a Romance Game Visual Novel by Voltage, Inc.. In it, the player takes the role of a young woman who, although she lives at her family's Shinto shrine, works as a librarian and considers her life completely ordinary... until she begins having strange dreams about monsters trying to kill her and waking up under a red moon.

After a series of strange, life-threatening accidents from which she only narrowly escapes harm, she's approached by a group of strange men who claim that they are not human but ayakashi, and that she has "awakened" to an inborn power that makes her a magnet for all kinds of supernatural nasties hoping to use it to their own benefit.

These five ayakashi are the only reason she's lived through the day, and they promise to continue to protect her... but not for free. Their help comes at a price: her body.

In return for their protection, she'll have to bear one of them a child.

Originally published on iOS and Android devices in 2014, it got a Nintendo Switch port in April 2020note Split into two parts, each with three protagonists: one version has Kiryu, Chikage, and Yukinojo, the other with Miyabi, Kyoga, and Samon. Shinra is not in either version..

Enchanted in the Moonlight provides examples of the following tropes: