Series / It's Me or the Dog 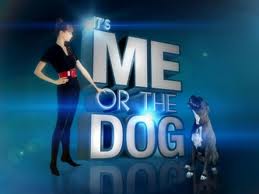 Animal Planet's show about owners of problem pets seeking the advice of expert trainer Victoria Stilwell. It's like Supernanny for dogs, which is no surprise seeing as it's produced by the same company.

The series has its own channel

on YouTube, where it uploads snippets from previously aired episodes and, starting in 2019, full episodes of the U.K. series (many of which previously suffered from No Export for You) every Saturday. Starting in September 2019, the channel also provides "Updated" versions of previously-uploaded episodes in which Victoria Stillwell talks about her experiences training the dog, what she could've done better, and answers some frequently asked questions.

See My Cat from Hell for the feline equivalent.