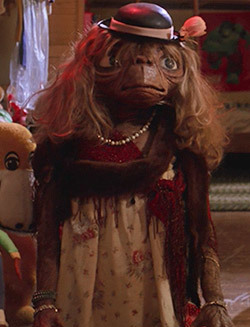 There's an old gag about little girls (and it's almost always little girls, rarely ever little boys) dressing up their dogs, cats, and anything else pet-like they can find as if they're dolls. They put them in cute little clothes and act as if their pet is a living doll. All the animal can do is begrudgingly deal with it (and if they're a Talking Animal, snark about it).

This may overlap with The Dreaded Pretend Tea Party, another childish game that is considered annoying by those outside the target demographic. Also likely to overlap with And Call Him "George"!. If the kid doing the dress-up is doing it out of love, they're both Innocently Insensitive and (usually) an Animal Lover.

As a side note, please don't do this to your pet — it just stresses them out.