Series / My Cat from Hell 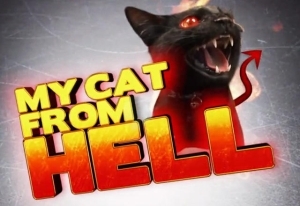 Hiss!
"I'm Jackson Galaxy. I'm a musician by night and a cat behaviorist by day. I've met cats with all kinds of problems, but I've never met one I couldn't help."
Advertisement:

A series on Animal Planet featuring Jackson Galaxy, "musician by night, cat behaviorist by day," taking on cases from clients whose pets are out of control. Each episode features two cases, and follows Jackson as he meets the clients and their cats, inspects the animals' accommodations, observes and assesses the cats' behavior, and instructs the family on how to address their pets' issues. Jackson prefers a holistic approach to his treatments, and typically suggests activities such as restructuring of the cats' physical environments; adjusting the animals' daily schedules to fit the "hunt-feed-sleep" routine observed by cats in the wild; meeting the cats' requirements for physical and mental stimulation; and educating owners on how to interact with their pets in a healthy manner.

See It's Me or the Dog for the canine equivalent, and Supernanny for the child equivalent.