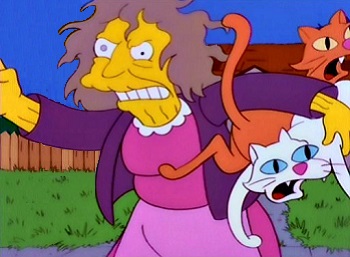 is a real-life psychiatric problem. Although real life animal hoarders come in all ages, races, pet preferences, and sexes, animal hoarders in fiction are predominantly older white women with a fondness for cats.

This person is invariably Not Good with People, except that instead of being a Friend to All Living Things, she usually only has an affinity with one specific type of animal, which will flock to her like moths to a flame. She lives alone (Either because she couldn't get married or because she is a widow) except for the large number of cats or whatever animals living with her. She is often feared by the community and seen as an eccentric recluse. Sometimes she will turn out to be a Misunderstood Loner with a Heart of Gold, leading to An Aesop about judging a book by its cover.

This trope definitely seems skewed towards female characters, and can be read as an extension of the traditional negative characterisation of spinsters, especially when it's implied that the cats are a stand-in for human children that she never had before it was too late. Men, apart from an occasional trend toward living on a rooftop surrounded by pigeons, tend towards either more complete isolation or a more diversified set of friends. Male or female, however, animal hoarders tend to do a poor job of caring for their pets. Sanitation is often a nightmare: many of the animals die from malnourishment, and the owner themself might die from related illnesses. In fact, the "Crazy" part of the trope name Crazy Cat Lady is Truth in Television because a parasitical disease Toxoplasmosis that causes neurological maladies such as schizophrenia

is commonly found in litter boxes of many warm blooded animals (especially prominent with cats). Thus adopting more pets than one can maintain a clean healthy standard for increases the chances of the owner becoming this trope.

Three guesses who inherits the house when they go. See Kindhearted Cat Lover for examples when liking cats is not a symptom of being socially ineptnote And might in fact be a Hidden Depth. and Introverted Cat Person for cat lovers who are reclusive but not eccentric. See All Witches Have Cats, where the many cats are a sign of a magic caster.

Generally not related to Cat Girl, outside of harem series; although the term may also refer to one with mental issues.