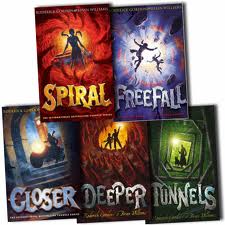 Tunnels is a Middle Grade / Young Adult subterranean fiction series by Roderick Gordon and Brian Williams. The series consists of six books. A manga based off the books was released in Japan, and film rights have been given to Vincenzo Natali, though production has never started.

Will Burrows is a fourteen-year-old boy whose major passion is digging. He often helps his archaeologist father perform excavations in the London Borough of Highfield. However, he gets more than he bargained for when his father's latest investigation leads to the discovery of an underground city called the Colony, which has remained hidden for centuries from the "Topsoilers" on the surface. However, the tyrannical Styx ruling class of the Colony has come up with a plan to commit genocide on the Topsoilers and reclaim the surface for themselves. Because Adults Are Useless, it is up to Will and various friends of his to stop the Styx, a quest that takes them ever deeper into bowels of the Earth.