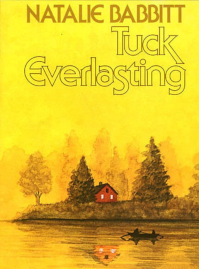 Tuck Everlasting is a 1975 fantasy novel exploring immortality and whether it's worth it.
Advertisement:

In the late 1800s, Winnie Foster's life is boring. Nothing exciting ever happens, and being in a family of strait-laced blue bloods has cramped her style. She goes out exploring in the woods one day and meets the Tucks. The Tucks became immortal after drinking water from a spring. She is fascinated by Jesse Tuck, a boy who's really 104 years old. The family shares with her the secrets of the spring. However, a man in a yellow suit is also after the secret behind the Tucks' immortality. The Tucks are threatened by the man in a yellow suit until they are in grave danger. Winnie must choose whether to live forever, and find how to save the Tucks.

The story has been adapted into a film twice: in 1981 by Office of Communications and in 2002 by Walt Disney Productions. A musical adaptation was produced in 2013, and premiered on Broadway in 2015.

Tropes used by the novel and films: