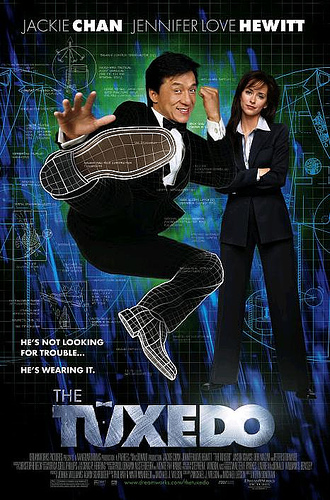 "...In the year 2001, $35 billion worth of bottled water was consumed worldwide. Today, bottled water costs more per gallon than gasoline. We, my friends, are the new oil barons."
Advertisement:

Dietrich Banning (Ritchie Coster) is the owner of a bottled water company. By infecting a swarm of water strider insects with a strain of bacteria that causes water to dehydrate rather than rehydrate the drinker and letting them loose, he plans to render all the water in the world undrinkable except his own, thus increasing its value.

Jimmy Tong (Jackie Chan) is a New York taxi driver. After escorting a mysterious woman to her destination at breakneck speed, she recruits him to be the chauffeur of James Bond Expy Clark Devlin (Jason Isaacs), who is hot on Banning's trail. After an attempt on Devlin's life lands him in a hospital, he tells Jimmy to take his tuxedo and stand-in for him. Jimmy promptly finds that Devlin's tuxedo (the Tactical Uniform EXperiment) is a $2 billion dollar power suit that allows the wearer to do kung-fu, walk on walls and ceilings, and dance really well (among other things). He and CSA agent Del Blaine (Jennifer Love Hewitt), who presumes him to be Devlin and is thus more than a little confused at his ineptitude, team up to bring Banning down.

Alas, what this means is that this movie, instead of showcasing Chan's personal skills and stuntwork, showcases a whole lot of more-or-less unimpressive special effects pertaining to the suit's abilities. On the rare occasions that some actual stuntwork is done, it's performed not by Chan but by as many as 7 stand-ins. Whereas in other Chan films the Hilarious Outtakes during the end credits showed failed stunts, the ones in this film show mucked-up dialogue.