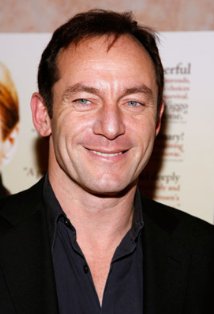 "Every time I make a plan, God laughs at me."
"Hello to Jason Isaacs!"
— Mark Kermode
Advertisement:

Jason Michael Isaacs (born 6 June 1963 in Liverpool, England) is one of the most deliciously, delectably, devilish British actors of the present day. He was born in 1963 in Liverpool to a Jewish family, and his family were constantly harassed by fascists during his youth in London. After graduating with a degree in law from the University of Bristol, he immediately went on to study at London's Central School of Speech and Drama. He often plays despicable characters, despite being a self-described "boring suburban man" in his personal life. He is not incorrect in this description, as he married his longtime Central School girlfriend Emma Hewitt, a documentary filmmaker, in 2001; they have two daughters.

And no, he's not related to Timothy Dalton, despite their similar looks.