Film / The Death of Stalin 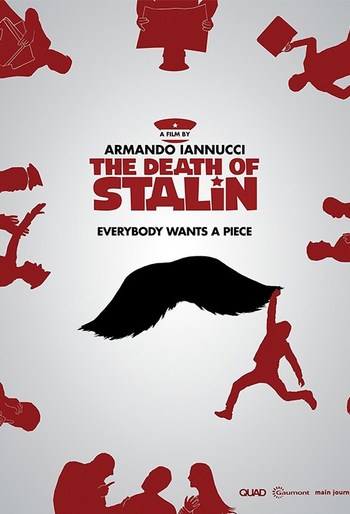 Leadership is up for grabs.
"Stalin would be loving this."
— Vyacheslav Molotov
Advertisement:

The Death of Stalin is a 2017 period comedy-drama directed by Armando Iannucci, based on a French graphic novel.

Moscow, 1953. Josef Stalin has ruled the Soviet Union with an iron fist for three decades. The people live in constant fear of his state apparatus, which routinely arrests them in the middle of the night. His minions are ass-kissers out to save their own skin, turning against anyone they need to in order to survive. And then, he dies. In the aftermath, a power vacuum opens up and the remaining members of the Presidium (the governing body) aggressively manipulate, backstab, and plot against each other to figure out the Succession Crisis. This includes:

Also appearing in the film are Andrea Riseborough as Stalin's daughter Svetlana, Rupert Friend as his son Vasily, Olga Kurylenko as a pianist with a grudge against the dictator, Paddy Considine as the director of Radio Moscow, and Jason Isaacs as Georgy Zhukov, Stalin's most victorious general and the man who took Berlin.