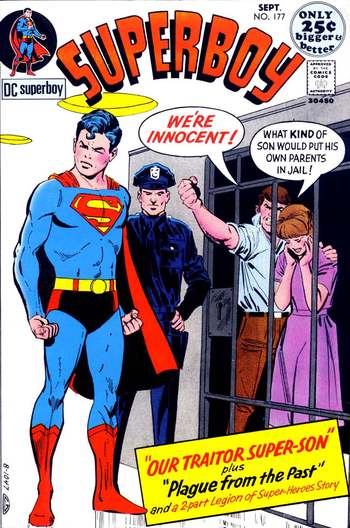 "How sharper than a serpent's tooth it is to have a thankless child."
— King Lear, King Lear
Advertisement:

The inverse of Parental Betrayal, Betrayal by Offspring is when a parent or parents is betrayed by one or more offspring. Similar to Et Tu, Brute? except that the act of betrayal is done by a son or daughter rather than a close friend thereby making it even more painful. Can overlap with instances of Antagonistic Offspring but can also arise in cases where the child and parent had a good relationship before the act of betrayal.

Exactly what type of action constitutes a child's act of betrayal varies. In more overt instances, it can be part of an intrafamily power struggle over control of a kingdom or empire. Here, Betrayal by Offspring is a supertrope of Evil Prince and can result in a Self-Made Orphan if the act involves Patricide and/or Matricide. If this doesn't happen, Offing the Offspring can be the reaction of the betrayed parent. In less violent situations, the intrafamily power struggle and the act of betrayal can be over business and/or financial matters. These usually have fewer bloody outcomes but the emotional wreckage is still high.

On the other hand, the child's act of betrayal does not always have to be unambiguous and outright. In fact, the child even could be trying to do something he or she thinks is the right thing but the parent considers it an act of betrayal because it conflicts with his or her religious beliefs, moral convictions, political ideology, cultural values, or family traditions. This, in turn, often leads to a scene where the parent proclaims, "I Have No Son! (or Daughter)!" Sometimes, however, it is just because the child Hates Their Parent, and wants to see them fail. In examples where this trope is Played for Laughs, it also can be over something that's ridiculously minor but the parent reacts as if the child has stabbed him or her in the heart.

The instances of Betrayal by Offspring where the child informs on or turns a parent over to the authorities can be another case of a child following his or her moral conscience. However, it also can be because the child stands to personally gain from the action.

Can come into play with Mad Scientist's Beautiful Daughter if the daughter undermines her parent's Evil Plan by either her own will or after persuasion from the good guys.

Due to being a betrayal trope, expect some serious spoilers. As such all spoilers will be unmarked!

Satsuki Kiryuin backstabs Ragyo, her mother, revealing that Honnouji Academy was always made to stop Ragyo's plans of conquest.

Satsuki Kiryuin backstabs Ragyo, her mother, revealing that Honnouji Academy was always made to stop Ragyo's plans of conquest.