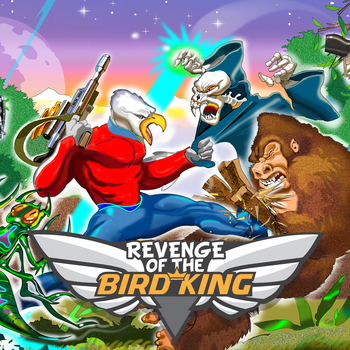 Revenge of the Bird King is a 2018 Platformer with Run-and-Gun elements . It was developed by M7 Games and published by Limited Run Games. It was released on the Nintendo Switch and Play Station Vita.

The game takes place on the planet Gunworld, and on this planet guns grow on trees. When one day a group of intergalactic super heroes named the Extraction Faction. You are a humble bird-man, and seemingly the last of your race as well. Now you must do battle wit the Extraction Faction to defend Gunworld, but all is not as it seems.

Revenge of the Bird King contains examples of: