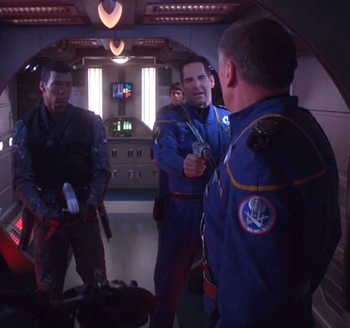 "You're relieved, Captain!"
"For the Watch." [stab]
— Alliser Thorne, Game of Thrones
Advertisement:

Here's the situation: you're on a ship. The Captain is supposed to be the commanding officer on the ship, and his word is supposed to be law. But sometimes, members of the crew don't see it that way. Maybe someone gets it in his head to become captain himself, and the current captain needs to go. Maybe the captain is a bit too tyrannical or soft for the crew's liking, or they think the captain has lost his mind and is leading them on a suicidal course, and the crew would rather go back to Tahiti. Whatever the reason, someone gets the bright idea to take up arms against the captain and before you know it, we've got a mutiny on our hands.

Militarily speaking, a mutiny is the military form of sedition, a conspiracy to disobey a superior officer whose orders one is legally bound to obey. But in popular fiction, particularly pirate stories, the term is mainly used for the rebellion of members of the crew against the captain or other person in charge of a ship, either at sea or in space. Just like rebellions on land, a mutiny may or may not be justified, though it's worth telling that mutinies are far less likely to be justified than regular rebellions. In many stories (and in real life) the penalty for mutiny is usually death, so many mutineers do not live long if they fail.

It's not always illegal. If the commanding officer's actions are illegal, immoral, or are themselves contrary to higher orders, his ranking underling can take action to "relieve him of command," usually using those exact words. Of course, the captain will still think it's mutiny. The junior officer will, of course, be expected to justify his actions before a full inquiry, military tribunal, court martial, or other group of stern old officers in the Dénouement. When The Captain is the one who is technically disobeying orders from a higher power, it's an Anti-Mutiny.

As you might expect, mutinies are a case of Truth in Television, and there are many cases throughout history of mutinies happening not only on board ships, but on land as well.

Fictionally, Pirate ships may face mutinies that are treated just as seriously as those on other ships. In Real Life, pirates set up their ships so they could depose a captain as they pleased. Pirate captains were mostly elected by their crews to begin with too.

When the commanding officer does something illegal with the ship, that's not mutiny, that's barratry

Compare The Coup for overthrowing the civilian authorities.

Fed up with Cpt. Sobel's incompetence and Winters being court martialled by the former, Easy's Sergeants take matters into their own hands and choose to resign en masse, knowing Sobel can and will get them killed thanks to his lack of leadership skills.

Fed up with Cpt. Sobel's incompetence and Winters being court martialled by the former, Easy's Sergeants take matters into their own hands and choose to resign en masse, knowing Sobel can and will get them killed thanks to his lack of leadership skills.