Film / Duel in the Sun 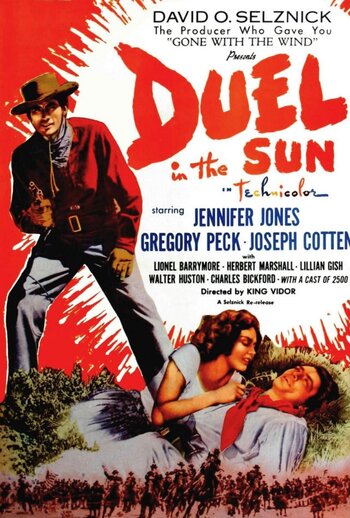 Duel in the Sun is a 1946 Technicolor Western film directed by King Vidor and produced and written by David O. Selznick, based on a novel of the same name by Niven Busch.

Pearl Chavez (Jennifer Jones) is a Mestiza (half-white, half-Native American) girl who is orphaned after her father kills her mother after he caught her with a lover. Before he is executed as a punishment, he arranges for his daughter Pearl to live with his second cousin and old sweetheart, Laura Belle (Lillian Gish).

When she arrives, the gentle and gracious Laura Belle is happy to welcome her to their home, but not so her husband, the wheelchair-bound Senator Jackson McCanles (Lionel Barrymore), who calls her a "half-breed" and jealously despises Pearl's father. Pearl also meets their sons, the McCanles brothers: Jesse (Joseph Cotten) and Lewt (Gregory Peck), the latter being a ladies man with a personality quite unlike that of his gentlemanly brother Jesse. He expresses his interest in Pearl in direct terms and she takes a strong dislike to him, and when she eventually submits to Lewt's aggressive advances one night, Pearl is angry with him and ashamed of her own behavior; however, she also cannot help but be flattered by his lust and attentions. This starts a downward spiral that draws them both.

This was Selznick's attempt to outdo Gone with the Wind, and he was personally crushed when it ended up being a critical and commercial disappointment. The film's sensual nature managed to pass the notoriously prudish standards of The Hays Code but some religious groups, notably the Catholic Legion of Decency condemned the film, and any attempts to boycott the film only encouraged audiences to see it and may have played a part in the movie breaking even at the box office.

Paul Bartel's Lust in the Dust (1984) took its name from the nickname Duel earned, and shared some of its plot, albeit aimed towards a comedy spoof direction.