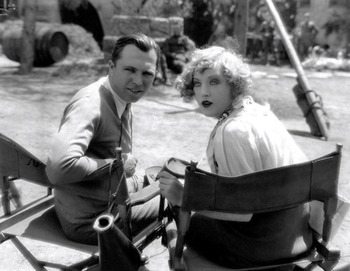 King Wallis Vidor (February 8, 1894 – November 1, 1982) was an American film director, film producer, and screenwriter, who did many things to merit his lofty name. He was the founder of the Director's Guild of America (it started in his house) and was The Pioneer in editing, composition, and large-scale films. The Big Parade was the Breakthrough Hit for Metro-Goldwyn-Mayer studios and one of the greatest World War I films ever made. The Crowd would be regarded as one of the masterpieces of silent cinema while Show People stands as one of the great comedies of the era, showcasing Marion Davies' talents, which led even Orson Welles to lament the negative reputation that Citizen Kane attached to her by association with Hearst. He also took over directing duties for The Wizard of Oz from Victor Fleming, who went on to direct Gone with the Wind. Notably, Vidor directed the sepia tone Kansas scenes, and Dorothy's first encounter with the Scarecrow (at least the version that appears in the finished film).

Vidor, however, was keen on Doing It for the Art and for regarding technical limitations as challenges. When sound arrived, when most studios were making stage-bound flat films with no cinematic invention, Vidor went ahead and made Hallelujah an all-black musical shot on location in the Deep South with sound recorded on location. It was Fair for Its Day and an incredible technical achievement. Vidor's films after that tended to alternate personal films with commercial work and many of his personal films are still rare and underseen which means that by and large, despite being regarded as, perhaps, the world's greatest director in the '20s or mid-'30s, subsequent generations has seen him decline in favor of John Ford, Howard Hawks, Orson Welles (who admired his films) and Alfred Hitchcock. His film adaptation of Ayn Rand's The Fountainhead did little to win him favors either, though Vidor himself had reservations about Rand and the film is visually sophisticated. Nor did a film like Beyond the Forest, which its star Bette Davis regarded as an Old Shame and which darkened his reputation.

Vidor ventured into the Epic Movie with an adaptation of War and Peace with Audrey Hepburn and Solomon and Sheba with Yul Brynner but he then retired from Hollywood. Though even in retirement, he made experimental films, one of them Metaphor documented his interview with painter Andrew Wyeth who told the director that his film, The Big Parade was the single greatest influence on his work. He published his autobiography, A Tree is A Tree.