Film / Beyond the Forest 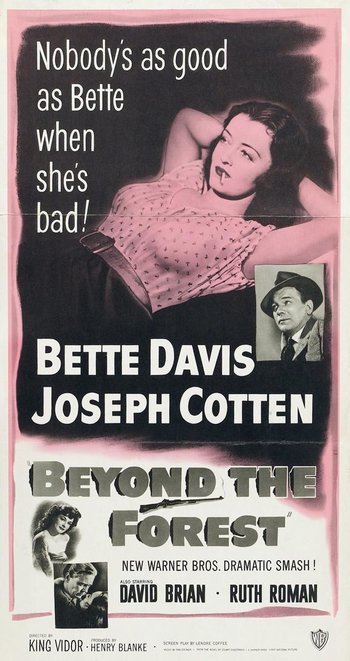 "I don't want people to like me. Nothing pleases me more than when they don't like me. It means I don't belong."
— Rosa Moline
Advertisement:

Beyond the Forest is a 1949 American Film Noir directed by King Vidor and featuring Bette Davis and Joseph Cotten.

Rosa Moline (Davis) is the neglected wife of Doctor Lewis Moline (Cotten) in Loyaltown, Wisconsin. The small town is powered by a small industry but is still lightly settled, being rural in character while still being exposed to consumerism and mass media from the big city. This affects Rosa Moline adversely. She grows bored and becomes infatuated with a visiting Chicago businessman with whom she engages in an affair, less out of love than a desire to go to Chicago and live the high life and escape her existence. This creates tensions in her marriage and leads to a series of vignettes where Rosa sets herself apart from the town, engages with dreams and fantasies about going to live in Chicago, setting the stage for a violent conflict.