Film / Beyond the Law 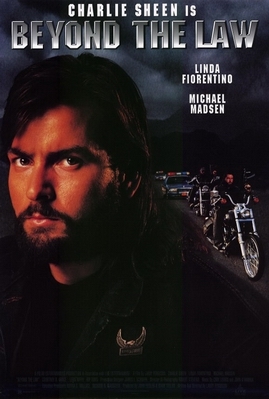 Beyond the Law is a 1992 crime film by Larry Ferguson. Based on a True Story, Charlie Sheen plays Daniel Saxon, an ex-cop recruited by agent Price (Courtney B. Vance), working for the State Attorney General's Office to infiltrate the gun running and drug smuggling community in the American Southwest. Two problems: while Daniel was a fine cop, he has little idea where to start; and several agents sent before him disappeared without a trace. Daniel hits a stroke of luck when he is approached by Virgil, a jovial if unstable mechanic who agrees to help Daniel move undercover in the world of outlaw bikers, who control the arms and drug trade in the region. Taking the Alias "Sid", Daniel successfully integrates himself into the life of the Jackals; a group led by Blood (Michael Madsen), who takes "Sid" under his wing. As Daniel delves deeper into the underworld, he develops a relationship with a photo journalist documenting the club, Renee (Linda Fiorentino) who is aware of his double life. Daniel quickly finds this new world pushing him to the brink of sanity, surrounded by addicts and career criminals who draw down at the drop of a hat and expect him to be just as unstable and violent as they are.