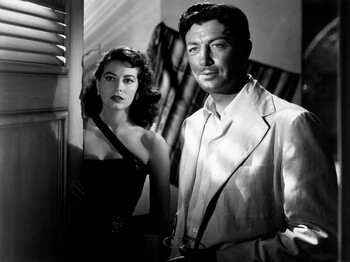 The Bribe is a 1949 Film Noir directed by Robert Z. Leonard, adapted by screenwriter Marguerite Roberts from Frederick Nebel's short story of the name name.

Rigby (Robert Taylor) is a federal agent who has been sent to the island of "Carlotta", somewhere off the coast of Central America. Rigby is investigating a racket in which smugglers are stealing valuable airplane engines and surreptitiously selling them off with other, much less valuable war surplus.

In the town of Los Trancos he encounters some bad guys. Among the bad guys are Tug Hintten (John Hodiak), an alcoholic former Air Force pilot, and J.J. Bealer (Charles Laughton), an obvious weasel who soon is offering Rigby a $10,000 bribe to go away. On the plane to Carlotta along with Rigby is a businessman named Carwood (Vincent Price), who acts friendly and affable but is soon revealed to be the head of the smuggling ring.

However, Rigby's attention is soon distracted when he meets Tug's luscious wife Elizabeth (Ava Gardner). Elizabeth is stuck in a failed marriage with Tug and quickly falls for Rigby. When Rigby comes to realize that Elizabeth may be implicated in the smuggling ring, he has to decide whether or not to turn the lot of them in, or to sell out and let Elizabeth off the hook.