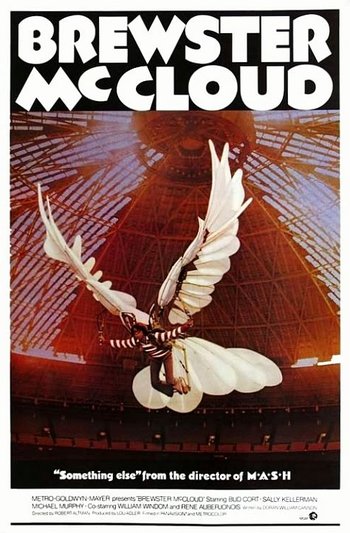 It is most definitely "something else".
Advertisement:

Brewster McCloud is a 1970 Black Comedy/fantasy film directed by Robert Altman. It was his follow-up to M*A*S*H.

Brewster (Bud Cort) is an odd young man living in the fallout shelter beneath the Houston Astrodome, who—under the guidance of the mysterious Louise (Sally Kellerman)—is in the process of building a contraption that will enable him to fly. Meanwhile, the city of Houston has been terrorized by a string of murders. Lt. Frank Shaft (Michael Murphy), a hotshot detective, is brought in from San Francisco to investigate, and seems to be closing in on Brewster. In the middle of all this, kooky Astrodome tour guide Suzanne (Shelley Duvall, in her acting debut) strikes up a relationship with Brewster, complicating things for all involved.