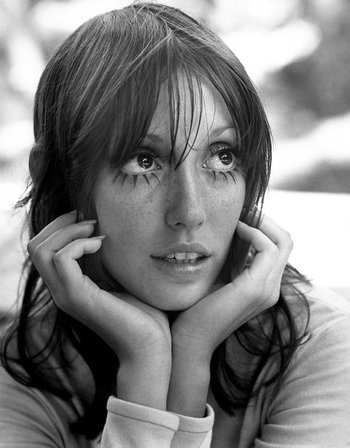 "There's nothing that can beat the feeling of doing a movie or a TV show that makes everyone feel good."
Advertisement:

Discovered by Robert Altman while he was in Houston shooting Brewster McCloud, she appeared in seven of Altman's films, gaining acclaim for her ability to create quirky, memorable characters. Attracting the notice of other top-notch filmmakers, she had a notable supporting role in Woody Allen's Annie Hall, then was tapped by Stanley Kubrick for her most famous role, as Wendy Torrance in his adaptation of Stephen King's horror novel The Shining. She was busy in The '80s, not only appearing in movies, but also creating TV shows such as Faerie Tale Theatre and Tall Tales & Legends. Duvall and her partner, musician Dan Gilroy, left Hollywood in 1994 and resettled in a small town in the Texas Hill Country west of Austin. She gradually backed away from acting after that, making her last film appearance in 2002.

Very much a Reclusive Artist, she disappeared from the spotlight until a 2016 appearance on Dr. Phil, appearing disheveled and somewhat incoherent, which raised concerns about her mental health, along with discussions about whether Phil was exploiting her instead of helping, and whether the legendary Troubled Production of The Shining and especially Kubrick's Enforced Method Acting techniques might have been a major cause of her issues. A 2021 Hollywood Reporter

interview seemed to find her in much better spirits. During this interview she was finally asked directly whether she believed Kubrick to have been abusive when he directed her in The Shining (as has often been the subject of Hollywood myth) and although she acknowledged the shoot was grueling and that he was a difficult, demanding man in general, she replied in the negative.

In 2022 — a full two decades following her last film role — Duvall would make her return to acting with the independent horror-thriller film The Forest Hills.

She is not related to Robert Duvall.