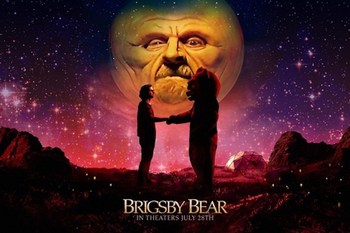 Brigsby Bear is a 2017 American Independent Drama-Comedy. Based on a story by Kyle Mooney (who also stars), the film was directed by his fellow member of the Good Neighbor comedy troupe Dave McCary (his feature film directorial debut), with script by Mooney and Kevin Costello. It hit Sundance Film Festival on January 23, 2017, and saw wider release on July 28 of the same year.

The movie centers on James, a college-aged man who lives an unusual life. He lives in an underground bunker with his parents, Ted and April (Mark Hamill and Jane Adams), staying safe from the irradiated wasteland above-ground. He spends his days working on math theory, but his true passion lies in watching and dissecting his favorite show (the only one they get in the bunker), 'Brigsby Bear', a long-running Space Opera about a bear using magic and science to fight the evil Sunsnatcher.

Except that's all a lie. Ted and April aren't his parents, they simply kidnapped him out of the hospital as a baby and constructed the bunker as an excuse to stay hidden. The story kicks into action when the police arrive to arrest Ted and April and rescue James. He's returned to his real family, including parents Greg and Louise Pope (Matt Walsh and Michaela Watkins) and high-school-aged sister Aubrey (Ryan Simpkins), but struggles to adjust to the real-world, including the shocking discovery that 'Brigsby' was written and produced entirely by Ted. Realizing that no one else has heard of his beloved show, James decides to make a movie to share his beloved series with the world and keep busy as he adjusts.