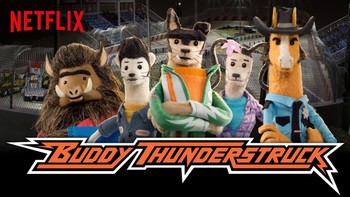 Buddy Thunderstruck is a stop-motion comedy series created by Ryan Wiesbrock as a Netflix original series, produced by Stoopid Buddy Studiosnote (Who are more famously known as the studio behind Robot Chicken.) and released in March 10, 2017.

The title character, Buddy Thunderstruck, is an egotistical canine semi-truck racer. His best friend Darnell, a white ferret/stoat, serves as his mechanic, accomplice, and voice of reason (usually). The two spend their days alternately tormenting and being admired by the citizens of the small town of Greasepit, who don't seem to have anything more interesting to do, and of course, winning every race.

A special Gamebook episode was released on July 14, The Maybe Pile. Only one season was made and it's unknown if the series will continue.

The Maybe Pile provides examples of: