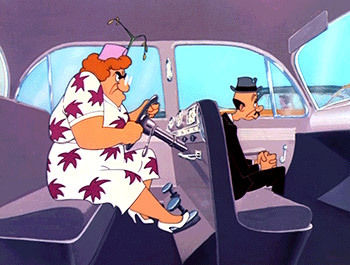 A literal version of the old phrase.
Advertisement:

When a passenger gives constant advice or orders to the person behind the wheel. The Henpecked Husband's wife or mother-in-law will do this a LOT. The Logical Extreme is a passenger who actually grabs for car controls (usually the wheel). In Real Life, there are legal consequences for this.note Usually, the person who grabs the controls assumes responsibility for the vehicle, which means they are to blame if the vehicle crashes, but have not broken the law if they take over from a suddenly incapacitated driver.

The role can occasionally be played by the Guy in Back, reminding the Ace Pilot not to burn up all of their fuel, or warning him of enemies coming up on their six. Of course, this is part of his job, but too much implies a lack of trust between them, or a certain fresh inexperienced quality about the guy in back.