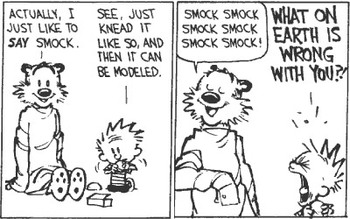 Fact: Whether by pronunciation, spelling, or use, some words are just plain funny to certain characters. Warning: Do not use any of these words to try to make an unfunny sentence funny. Tends to overlap with I Just Like Saying the Word, as in the case of the page image.

See also Narm, which can happen when these words crop up in inherently unfunny contexts. Also see Flowery Insults when used in an abusive manner. Also compare Heh Heh, You Said "X", and LOL, 69 and 420, Blaze It for specific inherently funny numbers.

Want to have some fun sharing your favorite ones? Take a gander over at the Just-For-Fun page!