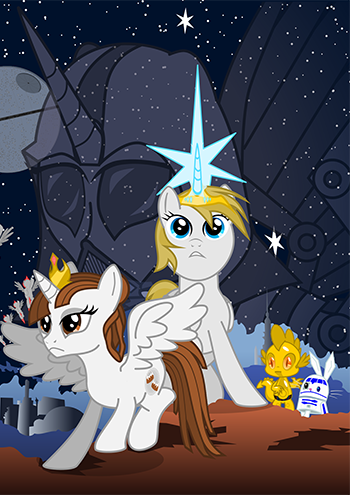 It's not about these ponies.
Advertisement:

is a Fusion Fic webcomic that overlays the milieu of Star Wars on the distant future of My Little Pony: Friendship Is Magic.

In the future, Equestria has become a galaxy-spanning stellar empire which has recently fallen into tyranny after the fall of the Alicorn Princesses in an unspecified catastrophe. A young trueborn alicorn, Princess Lace Organza, leads a rebellion against the Empire hoping to restore the old order, aided by a pegasus farm pony named Skywalker, the earth pony smuggler Can Soda, his griffon partner Growlbeakka, two poids named S-PK3 and 4N-6L, and the last known surviving Princess of Equestria, Twilight Sparkle. Opposing them are the forces of the Empress Dark Side and her chief enforcer, the evil Dark Feather.

However, the comic actually follows the misadventures of a motley assortment of background ponies who observe, and occasionally enable, canon events while desperately trying to stay out of trouble. Interactions with the main storyline are minimal at most, with the characters retreating into the background of the panels whenever a canon character appears.

Now expanding into other eras with a prequel series, The Pone Wars