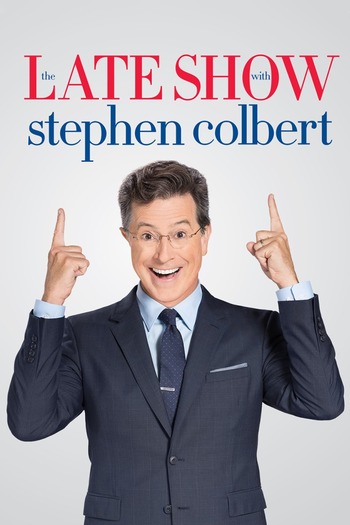 "Thank you for all joining me for my first episode of The Late Show with/starring Stephen Colbert! I am he. You are all witnessing television history and like most history, it's not on the History Channel."
— Stephen Colbert
Advertisement:

In 2014, two major figures were coming to crossroads in their lives. David Letterman was no longer interested in hosting a talk show and wanted to spend more time with his son, while Stephen Colbert was growing tired of maintaining his fictional persona and was planning to end his show. Thus, the stage was set to finalize the generational shift that had been happening in American late night TV since Jay Leno announced his first retirement.

The Late Show with Stephen Colbert debuted on September 8, 2015, on CBS with Colbert being joined on stage by New Orleans jazz musician Jon Batiste note who would later become well known as one of the composers of Soul, alongside Trent Reznor and Atticus Ross. and Stay Human as his house band. The new show is shot in an extensively renovated Ed Sullivan Theater and features a brighter, more energetic style that is also simultaneously more intimate thanks to Colbert's stage being pushed closer to the audience than Letterman's.

This version of the Late Show also slightly moves away from the pop culture commentary of other late night talk shows. Colbert continues to make political commentaries from behind his desk (though not in character this time), and his guests have remained an eclectic mix of celebrity, political, and business figures. In many ways, Colbert's Late Show is basically like the old Colbert Report, but stripped of the tiring (for him) faux-conservative act. So far, the approach has returned great dividends: since the election of Donald Trump, Late Show has been the highest rated show in late night television.

Tropes associated with The Late Show with Stephen Colbert include:

An opening of The Late Show from November 2021.

An opening of The Late Show from November 2021.