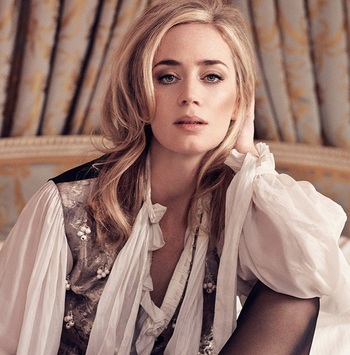 She began her film career with a bang in the lesbian love story My Summer of Love and was quickly rocketed to international attention when she appeared in The Devil Wears Prada. Both were enough to get her nominated for the BAFTA's Orange Rising Star Award (which was claimed by Eva Green in the end). Much was expected of her, though her filmography over the next few years was a rollercoaster of critical hits (Sunshine Cleaning, The Adjustment Bureau, The Young Victoria etc) and some major misfires (The Wolfman, Gulliver's Travels).

Things took a major upswing in 2014 first with the Sleeper Hit Edge of Tomorrow in which Emily received rave reviews for her Action Girl performance (in a surprisingly feminist action flick, too). By the end of the year, her Golden Globe nominated performance in Into the Woods catapulted her to the A-list.

She's been perpetually courted for the various franchises out there. She was going to be in the Marvel Cinematic Universe as Black Widow — but contractual obligations to Gulliver's Travels led to her dropping out and getting replaced with Scarlett Johansson, who was heavily campaigning for the role in the first place. Drew Goddard also reportedly wanted her for the Sinister Six movie that remains in Development Hell. She finally got to be part of a franchise as of 2018 with Mary Poppins Returns — playing none other than the iconic Magical Nanny. She's also got Brony cred due to her voicing Tempest Shadow in My Little Pony: The Movie (2017).

Blunt married John Krasinski in 2010, and they have two daughters together. Her sister Felicity is married to Stanley Tucci. In 2015 she became a US citizen.