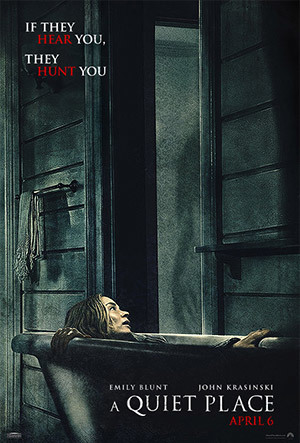 Silence is survival.
"Who are we if we can't protect them? We have to protect them."
— Evelyn
Advertisement:

A Quiet Place is a 2018 Sci-Fi Horror film directed by John Krasinski and written by him alongside Bryan Woods and Scott Beck, who conceived the story. The film stars Krasinski and his Real Life wife Emily Blunt, along with child actors Noah Jupe and Millicent Simmonds. Reported influences on the film include No Country for Old Men, There Will Be Blood, Alien and True Grit.

Set in the spring of 2020, an Alien Invasion of creatures, apparently sightless but also possessing an acute sense of hearing and impenetrable armored skin, has laid waste to most of human civilization. The film follows the Abbott family — wife Evelyn (Blunt), husband Lee (Krasinski), their sons Marcus (Jupe) and Beau, and their deaf daughter Regan (Simmonds) — who has survived the catastrophe but now has to live on their farm in near-total silence and communicate mostly in sign language in order to avoid attracting the attention of the monsters.

that a spinoff of the original was also in development, slated for a 2023 release.

A Quiet Place contains examples of:

Evelyn steps on a nail

As Evelyn is about to give birth, she rushes down the basement stairs and ends up unwittingly stepping barefoot straight through an exposed nail.

Evelyn steps on a nail

As Evelyn is about to give birth, she rushes down the basement stairs and ends up unwittingly stepping barefoot straight through an exposed nail.