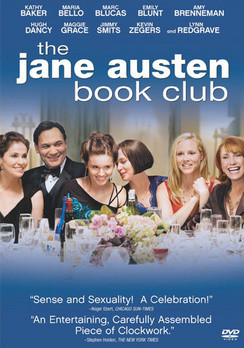 "Love is an act of sanity!"
— Jocelyn
Advertisement:

Adaptation of Karen Joy Fowler's 2004 novel about six people brought together by the novels of Jane Austen. Written and directed by Robin Swicord (who also wrote the screenplays for Little Women, Matilda, Memoirs of a Geisha, and The Curious Case of Benjamin Button).

Almost everybody has some inspiration in Jane Austen's characters: Bernadette is Mrs Gardiner of Pride and Prejudice, Jocelyn is the titular Emma, Sylvia is Fanny Price of Mansfield Park, Prudie is Anne Elliot of Persuasion, Allegra is Marianne of Sense and Sensibility, and Grigg represents all of Jane Austen's misunderstood male characters.

Each character mirrors one of Austen's novel plots (though not necessarily the same plot they mirror in the book...). Jocelyn enacts Emma, Sylvia performs Mansfield Park, Grigg does Northanger Abbey, Bernadette prances through Pride and Prejudice, Allegra stumbles along in Sense and Sensibility, and Prudie finally makes it through Persuasion. Each of them also tends to cross over into other novels as well...