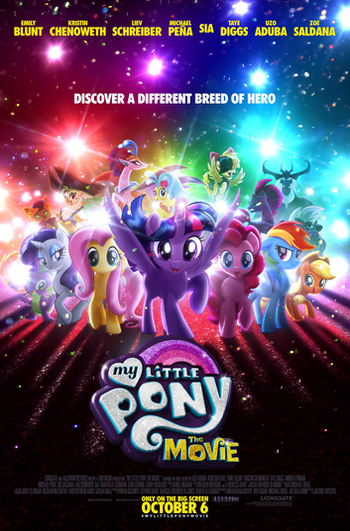 Twilight Sparkle and her friends have come a long way in seven years...
Twilight Sparkle: It's the Magic of...
Storm King: Yeah, yeah! Friendship, and flowers, and ponies, and blehhh...
Advertisement:

My Little Pony: The Movie is a feature film based off the hit TV series My Little Pony: Friendship Is Magic, set between the show's seventh and eighth seasonsnote The Equestria Girls movies that were spun-off from the TV series eventually evolved into their own sub-universe, which is mostly untouched by the TV series, and is part of the overall My Little Pony (Generation 4) franchise. It is the first animated film by Allspark Pictures, Hasbro's film label, and was released on October 6, 2017.

In this Big Damn Movie, Princess Twilight Sparkle is helping prepare for Equestria's first ever Friendship Festival, the grandest celebration any pony has ever seen. Unfortunately, this happens on the same day Canterlot is invaded by dark forces led by the sinister Storm King, who has a keen interest in taking the ponies' magic. With the fate of Equestria at risk, Twilight must embark on a perilous journey alongside her friends—Pinkie Pie, Rainbow Dash, Rarity, Applejack, Fluttershy, and Spike—to gather new allies beyond their home, all while evading the Storm King's most dangerous subordinate, the treacherous unicorn Tempest Shadow. Though their bonds are tested, the seven friends discover that there truly is no force stronger than the Magic of Friendship.

Longtime series crew members Meghan McCarthy and Jayson Thiessen notably left their work on the TV series to write and direct the movie, respectively, with five brand new songs by show composer Daniel Ingram, plus an original contribution by Sia.

See also IDW Publishing's My Little Pony: The Movie Prequel and The Stormy Road to Canterlot, a Prequel comic and junior readers' novel, respectively, that flesh out some of the film's new characters and set up the plot. Another junior novel series, My Little Pony: Beyond Equestria, serves as a continuation of the film. Not to be confused with the 1986 movie of the same name, which is set in the G1 animated continuity.

A third movie set in the My Little Pony universe was announced in February 2019 and released on September 24, 2021. That film, My Little Pony: A New Generation, is a 3D CGI Soft Reboot to tie in with the upcoming fifth generation, and does not have any connection to this film (beyond being a Distant Sequel to all of G4) or the 1986 film. A "successor" special, My Little Pony: Rainbow Roadtrip done with the same animation and artstyle as this film, was released in June 2019.

My Little Pony: The Movie provides examples of: