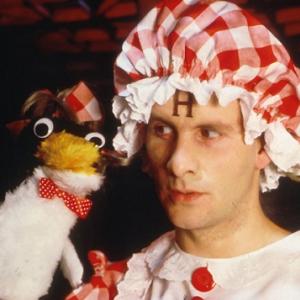 Write a big H on my forehead, because I'm such a Headcase? That's an excellent Idea, Mr. Flibble! Why didn't I think of that?
Tabitha: Penny, is there anyone else in this hangar?
Penny: Hold on! Let Penny ask Mr. Bear! ... ... ... ... Mr. Bear says no! Mr. Bear says we are all alone. ...He also hates you.
— Advance Wars: Days of Ruin
Advertisement:

A character who never goes anywhere without his Hand Puppet pal or his Companion Cube, Imaginary Friend or pet. Not only does the puppet keep him company, but he also gives good advice, which his owner trusts, perhaps to the point that he never seems to make a decision of his own.

At least, this is what he tells everybody. Nobody else has ever heard the puppet speak, and his friends will be inclined to think that it's all in his head. Especially if the puppet's opinion always seems to boil down to, "We should do what I want but I'm not confident enough to recommend on my authority."

It's remarkable how often the puppet will be called Mr. Something. The puppet may have urges or ideas that the character denies having themselves. This way they can literally keep the urges at arm's length, even if they act on them.

This trope can overlap with Ventriloquism — if it is blatantly obvious that anything the puppet says is actually being said by the character. If a pet speaks, it is usually an independent character: a Talking Animal. Similarly, if the puppet is alive see Perverse Puppet, Demonic Dummy, etc. See also Caligula's Horse, where pets are appointed to positions of authority. When the puppet isn't saying anything but is merely a conduit for what you want to say, see Inhibition-Destroying Puppet. If you want more serious advice, you'd probably be better off asking the Expert Consultant.