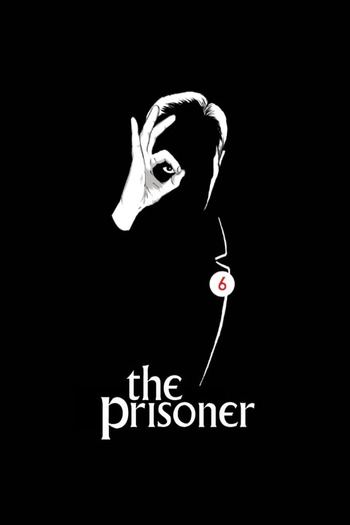 The Prisoner is a celebrated 1967 British Science Fiction drama with Spy Drama elements, filmed in Portmeirion, produced by and starring Patrick McGoohan, and co-created by George Markstein.

The series deals with the conflict between individuality and authority, told through an unnamed man's attempts to escape from a surreal Dystopian penal colony. Although that goal is continually thwarted, the Village's warders become just as frustrated as the Prisoner as they deal with a man who will not bend, will not break and never gives up the fight. Almost uniquely (for a series of that era not based upon a novel), it had a distinct Story Arc. The episodes had no clear progression, but the series did have a distinct beginning, middle and end, capped off by the Grand Finale "Fall Out".

The show is known for its obscure, confusing, yet intricate subtexts and plot twists, which culminated in the most notorious (and most beloved) Gainax Ending in British television history. Patrick McGoohan had almost complete creative control, a budget 40% larger than that of most other series, and no idea where the show was going from episode to episode. After what was broadcast as episode 11, the script editor, George Markstein, quit the series and was not replaced. Scripts and story ideas from that point on came from random people and places: a Western-themed episode was suggested by a video editor, and the infamous episode "The Girl Who Was Death" was an unused script from Danger Man (featuring characters, props and locations from said series). Finally, the series' infamous ending (reportedly written over the course of a weekend after ITC head Lew Grade abruptly cancelled the series, with one of the guest stars asked to write his own dialogue) takes a turn for the surreal, fuelled by McGoohan's wish to have "controversy, arguments, fights, discussions, people in anger waving fists in my face saying, how dare you?". Let's just say that had TV Tropes been created by an earlier generation of nerds, Gainax Ending would have been called the "Prisoner Ending" and leave it at that.

To keep things focused on the story's development, McGoohan often censored any hint of romance between his character and female prisoners/collaborators in submitted scripts, keeping the characters' attraction to Number 6 strictly one-sided. Instead of romance, the story deals with the battles between Number 6 and his surroundings: his struggles are often physical, but in the end, always come down to his mental resilience. More than once, Number 6 breaks his opponents down by utterly crushing their sanity; indeed, towards the end of the series Number 6 is more often shown fighting the Village from within rather than trying to escape.

The series is believed by many to be a sequel of sorts to McGoohan's previous series, Danger Man, with "Number Six" actually being Danger Man's John Drake. There is at least one shared character (or possibly just a character with the same name and actor), Number Six's "civilian" clothes are the distinctive outfit usually worn by Drake, and a publicity photo of McGoohan as Drake is X'ed out during the opening credits. Official Prisoner continuation novels flat out name the Prisoner as Drake. For many years, McGoohan publicly maintained that the Prisoner was not Drake, but it is suspected that he was just being contrary. It has also been speculated that, if Number Six was actually said to be John Drake, then McGoohan would've owed royalties to Ralph Smart, the creator of Danger Man.

Some have even theorized that both characters are also the same person as the secret agent McGoohan played in the film Ice Station Zebra. Certain small differences in behaviour between the three characters (for example, Drake does not drink, the Prisoner drinks occasionally, and the Ice Station Zebra character is a borderline alcoholic) have been taken as hints toward the reason Number Six resigned his job (his refusal to divulge this reason is the MacGuffin for the series; his antagonists figure that if they can break him enough to get that information out of him, the rest will follow).

Another one of the primary topics of fan debate is what order the episodes are meant to be in. There are five principal orders out there, and to be honest the original broadcast order is the one that makes the least sense. The only episodes that everyone agrees on is the introductory episode "Arrival" and the two-part finale, "Once Upon A Time"/"Fall Out" (which were filmed nearly a year apart). Everything in-between is up for debate.

Recap pages are under construction.

Two remakes of the series exist:

"Be seeing you."
Feedback

In a last-ditch effort to extract information from Number Six, Number Two makes him forcibly undergo regressive therapy, reverting him to a childlike state with limited communication.

In a last-ditch effort to extract information from Number Six, Number Two makes him forcibly undergo regressive therapy, reverting him to a childlike state with limited communication.