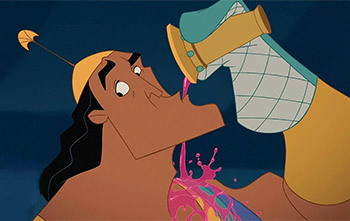 Some people's "discreet" is a little more liberal than others.

Heroes will every once in a while be offered a drink that they'd rather not partake of. Maybe they don't trust the one who gave it to them. Maybe it looks like an Alien Liquid Lunch or the product of a Lethal Bartender. Maybe they just don't do alcohol, Can't Hold His Liquor, or need to be on the top of their game for an upcoming fight, and can't just say so without giving something away. Whatever the reason, they'll discreetly pour it out or pass it off while no-one's looking. Often happens because a particular culture or subculture has a ritual that revolves around the drink in question and thus refusing the drink would be very impolite (or even dangerous). This is very much Truth in Television particularly at very formal events such as weddings, funerals and star-studded fundraisers which usually involve a different drink for every course and a lot of toasting. Toasting with a glass that isn't full is generally considered very impolite, but actually drinking all of those drinks would generally be dangerous to one's health. Fictional characters do this more often than real people however. Can also be used by a snobbish Big Bad to express disdain for the drink, the heroes, or both. As such it can function as a Kick the Dog moment for a villain. Often associated with The Vamp.

Compare Slipping a Mickey and Discreet Dining Disposal: which is when this is done with food. Overlaps with That Poor Plant when the drink is poured on a potted plant.