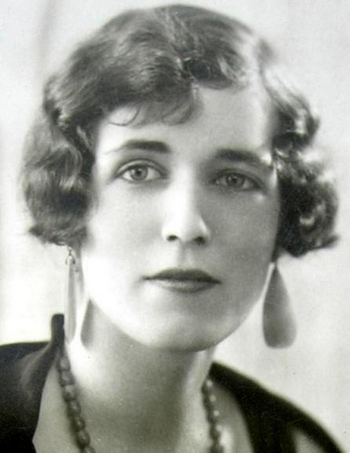 Georgette Heyer (16 August 1902 – 4 July 1974) was one of the most successful English romance novelists of the 20th century. Her books were famous for her intelligent comedy, the genuine sweetness of her romances and her meticulous research on the Regency period - which in turn leads to An Infamous Army rather incongruously being on the recommended reading list at, of all things, Sandhurst, the UK equivalent of West Point, for its superb description of the Battle of Waterloo. She also wrote a few detective novels here and there, but these aren't nearly as well-known, which is a shame.
Advertisement:

Heyer's heroes and heroines (occasionally dubbed Heyeroes and Heyeroines) tended to come in two types each:

Heyer was not above mixing and matching types, as well as subverting the expectations of her readers. In Sylvester, for example, the eponymous hero appears to be a Hero #1, whereas he's actually a Hero #2 (he merely has an unfortunate pair of eyebrows).

Heyer used a lot of tropes in various ways, so listing them by novel seems the best way to go.

Tropes present in most Heyers include: