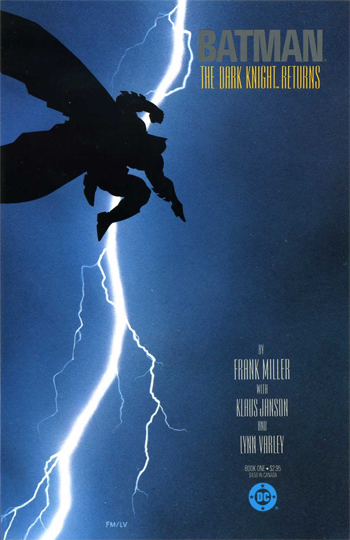 "There are seven working defenses from this position. Three of them disarm with minimal contact. Three of them kill. The other - [KRAKK] - hurts."
— Batman
Advertisement:

Batman: The Dark Knight Returns is a four-issue Batman comic book miniseries written and drawn by Frank Miller and published by DC Comics from February to June 1986.

In this storyline, Batman has been retired for ten years, alcoholic and consumed with grief after the death of Jason Todd, the second Robinnote a full two years before A Death in the Family canonized this, mind you. Superman, still as young and handsome as ever, has become little more than an icon, answering to the government and trying to stay as neutral as possible. Commissioner Gordon is weeks away from retirement, The Joker has been silently locked away in Arkham for years, and Two-Face is about to be released back into the world with a brand new skin. In Batman's absence, and in the midst of a killer heat wave, Gotham City is overrun with crime, plagued by a monstrously violent gang known as The Mutants. After encountering a Mutant gang in the alley where his parents were murdered, Bruce Wayne resurrects Batman, aided in his renewed crusade by Carrie Kelley, a 13-year-old girl who becomes the third Robin. Defeating the Mutants, though, turns out to be child's play compared to what Batman faces next...

TDKR is a seminal comic book work, with a gritty, unique style that's draped in the best of Film Noir techniques. Batman is a bitter, angry figure who narrates much of the story with philosophical musings and breaking down his methods. News Broadcasts shed light on the political debates surrounding Batman's influence, positive and negative, on the criminal underworld. The art itself is moody and atmospheric, black and grey dominate every page and the use of red and yellow are eyesores. It is often considered as influential as Watchmen in demonstrating the possible "maturity" of the comic book medium, and, along with Watchmen, it ushered in The Dark Age of Comic Books (for good or bad). It was also highly influential in the DCU's recasting of Batman and Superman's relationship: no longer are they perfect friends, The World's Finest, but rather somewhat distant and distrusting (if respectful) of each other.

Since its release, a number of Miller's Batman-related works have tied into TDKR in one way or another:

There have been a handful of animated references to TDKR as well. The first is a ten-minute segment in the DCAU, considered to be among the best adaptations of a Frank Miller work. Damian Wayne's child, who resembles Carrie Kelley, also makes a very brief cameo as a future Robin in Batman: The Brave and the Bold, fighting mutants in a "what-if" story. One episode of Darkwing Duck featured a future version of Darkwing that was heavily influenced by TDKR's depiction of Batman in the later issues.

A couple of elements from this story were borrowed by several Batman adaptations: