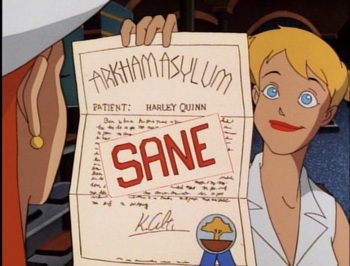 A character is declared insane, then declared sane.

This can happen to someone with real issues that were genuinely resolved, medicated away or declared "fixed" by quacks to be Not Your Problem; it can also happen to someone who is sane, whether by being mistakenly committed to an asylum or a psychiatrist seeing they are Obfuscating Insanity for reasons such as copping an Insanity Defense.

May include a Pre-Insanity Reveal. Can result in Reformed, but Rejected.