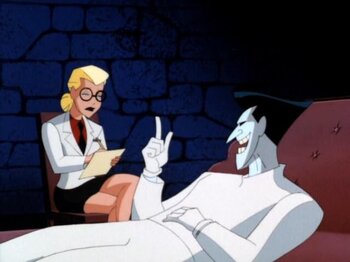 This episode was adapted from an Eisner Award-winning one-shot special-issue graphic novel of The Batman Adventures, the tie-in comic of Batman: The Animated Series.Comissioner Gordon goes to the dentist as part of a required health checkup, voicing his displeasure all the while. This displeasure proves especially well-founded this time when it's revealed that The Joker and Harley Quinn have taken the place of his dentist and the assistant in order to kill him. Fortunately for Gordon, Batman bursts in just before Joker can start drilling into Gordon's skull, revealing that he quickly worked out a chattering teeth toy clue about this latest caper. Seemingly just to rub it in, Batman tells the Joker the chattering teeth gag is rather lackluster for him, only for Harley to reveal (to the Joker's further irritation) that the clue was her idea. Annoyed but undeterred, The Joker tosses Gordon a grenade, keeping Batman busy so that he and Harley can escape.
Advertisement:

Later, in his latest lair in an abandoned toy factory, Joker is trying to come up with a new plan. Harley tries to seduce him and feed him a few ideas of her own, but the Joker berates her for her lack of creativity and angrily blows them off. The Joker then momentarily reconsiders one of his scrapped plans to kill Batman in a tank of piranhas, but suddenly remembers that he couldn't find a way to get the piranhas to smile, ruining the joke potential. Harley makes one last effort to seduce the Joker, but he kicks her out. She then laments her plight at not being able to advance her relationship with her puddin', and blames Batman for this.

In a flashback, Harley then recalls when she was just Dr. Harleen Quinzel, a fresh new intern at Arkham Asylum. The Joker somehow managed to smuggle a rose with a card into her office, so Harleen went to ask him about it. The Joker's initial attempts at seducing her were unsuccessful until he offered to tell her his biggest secrets. She then set up an appointment with the Joker, confident that his psychological tricks wouldn't work on her. However, the Joker's sob story about his past ultimately won her over. Beginning to sympathize with the Joker, Harley eventually came to believe the narrative he spun her during their following sessions, where he painted himself as merely being a humble, misunderstood soul who only wants to make people laugh, suffering unfair prosecution at hands of the law and the villainous Batman in particular.

Some time later, after the Joker escaped for a week and Batman came dragging him back to Arkham beaten and bruised, Harley lost it. In a fury at Batman for his "brutality" she stole several pieces of merchandise from a novelty store and put them together into her costume as a super-villain and broke the Joker out of his cell, adopting the "Harley Quinn" name he'd suggested to her earlier while seducing her.

Returning in the present, Harley now plots to make one of the Joker's scrapped plans work after all in order to get rid of Batman so she can finally be happy with her puddin'. She lures Batman with a tape warning of the Joker planning a Roaring Rampage of Revenge and offering to turn him in to the police in exchange for immunity, and captures him when he falls for it.

Batman wakes up hanging over a tank of piranhas just as the Joker plotted. Harley proudly explains to him that she has successfully modified the Joker's plan: By hanging the victim upside down, the fish will seem to be smiling. She goes on to tell Batman that successfully killing him will be a testament of her love to the Joker, meaning the two can finally settle down. When she tells him this, Batman is at first incredulous and then, to her surprise and disquiet, bursts into laughter at her gullibility. When he finally stops laughing, he explains that the story about his childhood that Joker told her back in Arkham was just one of several he's told to win the sympathy of various people who've tried to analyze him over the years. Hurt and infuriated, Harley starts to lower Batman into the tank, but he convinces Harley to call the Joker first, saying that he won't believe she has succeeded in killing his greatest foe unless he sees it for himself.

When the Joker arrives, Harley happily welcomes him only for him to beat and berate her, insisting that he wants to be the one to kill Batman. When she tries explaining that technically he is killing Batman since the Death Trap was his plan and that she merely improved upon his design, he points out that her having to explain why it "works" means it's not funny and therefore not worthy of being one of his jokes. In a fury, he then slaps Harley around, sending her reeling out a window and taking a fall from several stories up into a pile of rubbish in the alley. Injured and barely conscious, she feebly groans at her mistake as the police arrive, blaming herself for not getting the "joke" in the Joker's methods.

The Joker, meanwhile, is just about to release Batman, hoping to put this whole embarrassing incident behind him, when it occurs to him to try shooting Batman after all while he still has him at his mercy. Batman, however, is no longer incapacitated and escapes by breaking the tank open and getting hold of his belt while the Joker is distracted so he can pick the padlock on his chains. The Joker makes a run for it and escapes by jumping on a train, only to find Batman has caught up with him again. Rubbing it in, Batman explains that his Batman Gambit of getting Harley to call him was his only hope for escape, and that Harley came closer to killing him than The Joker ever did. Furious at these humiliating taunts, the Joker attacks, trading blows until Batman knocks him off the train and into a smokestack.

Later, as a newscaster reports the disastrous outcome to the Joker's latest caper on TV, an intern at Arkham wheels the heavily bruised and bandaged Harley to her holding cell. In an internal monologue, the much-chastened Harlene Quinzel tells herself that she finally sees the Joker for what he really is, and resolves to get over him and get on with her life. As she lies recuperating in her cell, however, she sees a rose with a "Feel Better Soon" card from him, and promptly tumbles right back into her Mad Love with him again.

Harley: My fault. I didn't get the joke.
Feedback

Example of:
Break Them by Talking