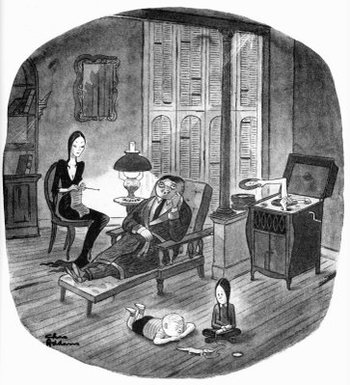 For many, many years, Charles Addams drew single-panel cartoons for The New Yorker. While these were standalone (and usually quite macabre) gag-a-week jokes, there were a few recurring characters: a creepy family of loners who were dark opposites of the idealized American family. The first members of the family shown were the mother, the butler, and the "Thing", making their debut in this cartoon.

They went on to appear again, joined by a father, a son, a daughter, a hinted-at-but-never-shown baby, a grandmother, and a recurring bald man whose relationship with the family was ambiguous, but became known as an uncle.

These characters proved to be so popular that a TV show was based off of them, and their popularity only grew from there.

If this family seems to bear an uncanny resemblance to Ray Bradbury's eldritch Elliotts, it's no accident. Addams created his family in about 1938, while the Elliotts first appeared in Mademoiselle, in a story called "Homecoming" in 1946 — which Addams illustrated. They wanted to get together on a collaboration, but it never happened. You may read about the Elliotts and see Addams' original illustration in Bradbury's 2001 anthology From The Dust Returned.

This page is for the New Yorker cartoons with the recurring family characters, not the TV show, movies, or any other adaptations and their tropes. In these cartoons, they didn't even have names; they were called "the Addams Family" because Charles Addams had created them. For a general overview of all works based off the cartoons, see here.

Other Recurring Characters in the New Yorker Cartoons

Tropes found in the cartoons: