"You have been foiled in your attempt to rescue your family.
However, you still have a chance."
—The Sega Genesis and Super NES versions' death screens.'' 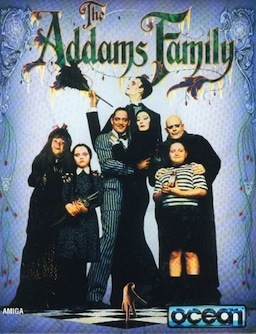 Numerous video games have been released based on the creepy and kooky Addams Family.

The Addams Family (NES) is a Nintendo Hard side-scrolling platform game by Ocean Software. You control Gomez Addams as he attempts to rescue his family members and reclaim his family fortune (the latter objective is actually required by the game in order to win). You'll have to have your wits about you, as you try to avoid the various perils befalling you and rescue your beloved family.

The SNES Addams Family, like the NES game, is a sprawler wherein Gomez must search the house and the grounds for his missing family, Wednesday, Pugsley, Granny, Fester, and Morticia. This one, however, is an entirely different game, featuring improved controls and an element of Mercy Invincibility, plus special weapons and a password system. It was later ported to the Genesis, and received a heavily pared-down reskin on NES and Game Boy as The Addams Family: Pugsley's Scavenger Hunt, tied into the 1992 animated series.

Despite sharing a title with the NES and Game Boy releases of the SNES 'The Addams Family', this was an entirely separate game. The game is a platformer requiring Pugsley to traverse different areas of the house (in an order of the player's choosing) to retrieve items from other family members. The aesthetic of the game, like the NES and Game Boy releases of the same name, was based on the animated series. The game was developed by Ocean and Enigma Variations Ltd. Unlike the other SNES platformer, it lacked a password feature, making an already difficult game even harder.