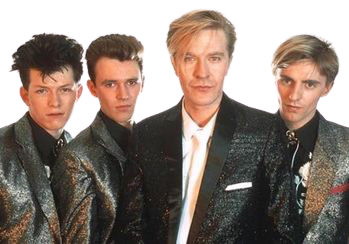 The Look of Love...
Well I hope and I pray, that maybe someday, you'll walk in the room with my heart.
Add and subtract, but as a matter of fact, now that you're gone I still want you back.
Remembering, surrendering, remembering that part.
All of my heart.
"All of my Heart"
Advertisement:

ABC are an influential New Romantic/Synth-Pop/New Wave band from Sheffield, UK. Originally a minimalist electronics group called Vice Versa, Keyboardist Martin Fry joined them and they eventually changed their name to ABC. They are most famous for their debut album, The Lexicon of Love, which was very highly acclaimed and a commercial smash. Their later albums were not so well received, and they split up in the early 1990s. But they made a comeback soon enough, and from then on have had a lucrative career on the 80s revival circuit.

Not to be confused with The Jackson 5 album ABC and its title song, nor the American television network ABC, nor the early-90s hip-hop group Another Bad Creation.