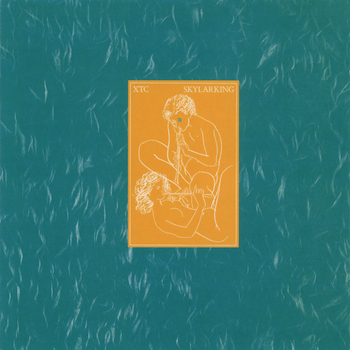 "Dear God, I hope you got the letter..."
Skylarking is a 1986 Concept Album (sorta) by Swindon-based New Wavers turned neo-psychedelic Alternative Rock band XTC and their eighth studio album.
Advertisement:

The album was recorded in a bit of a Troubled Production in 1986 in Woodstock, New York, with Todd Rundgren serving as producer, while Prairie Prince's drums were recorded separately at a studio in San Francisco (XTC had not had a permanent drummer since 1982, but worked with different drummers in the studio). Andy Partridge's original idea for the cover was to depict a woman's pubic hair with flowers involved. Virgin said no, but somehow were convinced to use a cover that depicted a naked man and woman playing flutes. Partridge's original idea was used for the 2010 vinyl reissue. Its somewhat Baroque Pop-meets-Psychedelic Rock sound, heavily drawing from The Beatles, The Beach Boys and The Kinks, gained praise from critics but barely crawled into the charts in both the USA and the band's native UK at first.

However, this situation was reversed when "Dear God" was issued as a single, reviving the album's sales somewhat. Originally intended for inclusion on the album, it was taken off of the UK release due to concerns over its perceived blasphemous content. Virgin Records would be proven partly right when the song saw release as a non-album single in the US in 1987 (it was originally the B-side to "Grass"), prompting outcry from religious groups and at one point leading to a schoolboy holding the operators at his school's intercom by knifepoint and forcing them to air the song. However, despite (or perhaps because of) the controversy, the single was a massive success, becoming XTC's one hit in the United States and foreshadowing the emergence of alternative rock in the American mainstream over the remainder of the year. As a result, the US release added "Dear God" back to the tracklist, albeit at the cost of cutting "Mermaid Smiled"; more recent reissues of the album include both tracks.

Skylarking was supported by three singles: "Grass" (in the UK only), "Dear God" (in the US only), and "The Meeting Place".

It would shock you, too, the things we used to trope on grass: