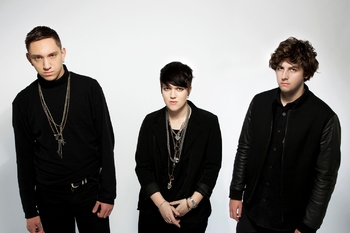 The xx are an indie pop/dream pop band from London formed in 2005, noted for their minimal sound and intimate lyrics. They are composed of three members: Romy Madley Croft (vocals, guitar), Oliver Sim (vocals, bass), and Jamie "xx" Smith (percussion, keyboards, electronics, production)note The band previously included guitarist/keyboardist Baria Qureshi, who left shortly after their debut album's release.. They hit it big in the indie world when they released their first Self-Titled Album xx in 2009, to widespread critical acclaim. Three years later, they released a second album called Coexist. They are perhaps best known for their songs "Intro", "Islands", and "Crystallized".

The xx provides examples of: