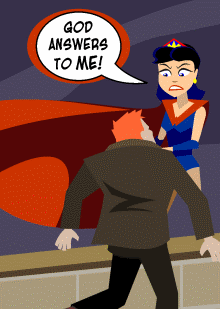 This is one of her less blasphemous utterings.
Eugene Hoff: All these men have come to kill me!
Olivia Benson: Shut your mouth, Eugene!
Eugene: Why?! Because they know! They know that I am greater than man! I am greater than God! And they're afraid of what I can do!
— Law & Order: Special Victims Unit, "Charisma"
Advertisement:

A character decides to compare themselves favorably to a deity. This can either be joking or serious (although either one can still be blasphemous).

The exact form can vary. One of the most common forms is a variant of saying one has "more X than God" (usually something that the deity in question wouldn't even bother to possess according to the theology). Also, the most common thing to top is money (especially someone in the Fiction 500). A more serious forms is claiming to be greater than God.

This usually involves the Abrahamic God, but not always. Regardless of which God, in a setting where Gods do exist, the character often ends up Tempting Fate. They might even do it right in front of a real god. Depending on the god and the situation, a Bolt of Divine Retribution (or divine laughter) may immediately follow.

A Super-Trope to A God Am I, Bigger Than Jesus.

A Sister Trope to Blasphemous Praise (giving this boast in the third person), Answers to the Name of God, Pride. May sometimes overlap with Badass Boast. Compare to Smite Me, O Mighty Smiter! when the person is taunting God.

Being a devoutly Christian man, the Lord Protector sees the Wolfwalkers (and by extension, the wolves themselves) as a savage Pagan infestation. Naturally, he quotes the Bible as he tries to commit murder.

Being a devoutly Christian man, the Lord Protector sees the Wolfwalkers (and by extension, the wolves themselves) as a savage Pagan infestation. Naturally, he quotes the Bible as he tries to commit murder.