Fanfic / Romance and the Fate of Equestria 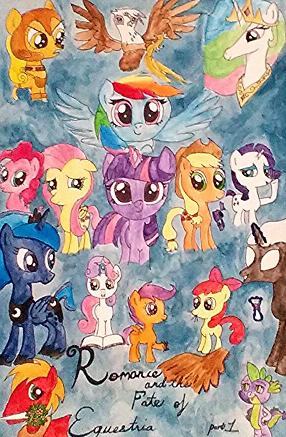 I am equine and I need to be loved, just like everypony else does...
Advertisement:

Romance and the Fate of Equestria, or RFE, is a My Little Pony: Friendship Is Magic fanfic written by Supa Supa Bad Truly Mad Moves. First published on June 2, 2012, and picking up where the second season ended, it has an elaborate continuity which ignores all post-season 2 canon, (though occasionally runs into eerie parallels with later official content) making it something of an Alternate Universe Fic due to its continued progress, much like The Nuptialverse.

The story begins with the Mane Six having a sleepover shortly after the events of the Season 2 finale, where Twilight reveals that her experiences at the wedding have gotten her interested in The Power of Love, which she intends to start studying the same way she studies friendship. What follows is a massive ensemble piece which weaves together many storylines, with all characters receiving a fair bit of the spotlight. While predominantly a Romantic Comedy, the flavor of its many plots varies enough to qualify it as a Gen Fic.

It can be found on fanfiction.net here

. An illustrated version, featuring special features such as fantasy cast lists and song lyrics, is slowly being produced on DeviantArt and can be found here

The series is divided into segments; Part One consists of chapters 1-36, while the much-longer Part Two ran from chapters 37-110. Part Three began on August 3, 2014 and is in progress.

Also has a prequel, Legend of the Goddesses

, which serves as an Origin Story for the RFE version of Celestia, Luna, Discord, and several OCs.

Romance and the Fate of Equestria and Legend of the Goddesses contain examples of the following tropes:

open/close all folders
General
Part One
Part Two
(( Fluttershy and Big Mac have a brief conversation that consists entirely of assorted Swift Tailor lyrics. Rainbow Dash calls them out on it (with a pretty thorough Take That! to Swift's lyrics), but later ends up playing it even straighter than they did when she starts reciting the lyrics of "Speak Now" to Derpy.
Part Three
Legend of the Goddesses