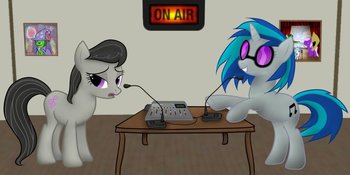 Like The Odd Couple. But with ponies.
"In the year 1001 of the Celestia calendar, Equestrian scientists developed advanced magic making it possible to broadcast music over long distances. This innovation was called “radio,” and quickly became a sensation throughout Equestria. For a period of time, only one frequency playing classical music was available. This changed when a popular young disk jockey with the stage name DJ-P0n3 (born Vinyl Agatha Scratch) formally proposed the creation of an independent radio station called K-COLT. It was approved, with DJ-P0n3 as the host. In addition to playing rock-and-roll and other popular music, DJ-P0n3 also hosted the first Equestrian talk show known as 'The Vinyl Scratch.' These broadcasts were recorded for historical significance."
Advertisement:

is a dramedy fanfic for My Little Pony: Friendship Is Magic. Written by Corey W Williams and featured on both Equestria Daily and Fimfiction.Net (the story can also be read here

on the latter site), The Vinyl Scratch Tapes is a record following two of the MLP:FiM fandom’s favorite background ponies, Vinyl Scratch and Octavia, as Radio Talk Show hosts. In this story, Vinyl is an eccentric, uninhibited Jerk with a Heart of Gold, and Octavia is her Beleaguered Assistant. Hilarity Ensues, along with some shipping (which becomes increasingly prominent as the story progresses) and a surprising amount of Character Development.

There are now two complete seasons. According to Word of God, Season 3 was in the works, but was cancelled

The whole thing was being adapted into an audio drama on YouTube by Midnight Magic Productions. Begin here

. It was ultimately cancelled after the 5th episode. However, Featherfall Studios is working on a remake of this audio version that will supposedly continue all the way to the end of the fic, starting with a short prequel video